Hello there! How are you doing today?

Today, I got up at 5:30am which was super early for me (I sometimes go to bed around that time XD),
I just happened to wake up early today so I got up and ate a little and did some work
and at a bit past 9am drove my scooter to Nara station to meet up with Franck from France!

These are the photos we took at lunch. 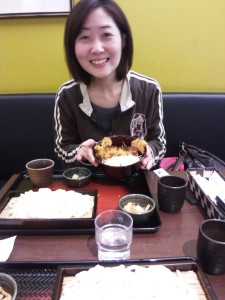 I was very hungry after an hour walk

This restaurant is called Otoya, one of my favorite restaurants.
You can check the menu here if you like! They serve really yummy fooooood!

Franck and I have been talking on facebook about his Reina graduation concert ticket (May 21st)
but really did not know that he would come around where I live till around 10 last night XD.

When I was viewing facebook and saw some of his photos that he uploaded last night,
I saw some familiar buildings in Nara so commented
“Are you in Nara now?!?!”….. so we have decided to meet up in like 12 hours later hahaha!
It was super short notice.

We met up at 10am near Nara station.

Since Franck just had breakfast at the guest house where he stayed at,
we have decided to walk around the area a bit.

Franck got some special postal stamps while we were walking to the restaurant.
Japan Post provide special stamps every month, he was saying that he is going to send some postcards to his friends, we stopped by at the post office and bought some stamps.

After lunch, we went back to his guest house and said good bye at the parking lot that I parked my scooter.

However……. I find him again on the way back to my house XDDDD, it was funny that I kind of bumped into him again without really meaning it.

Since we did, we had tea again till his train comes XDDDDD. 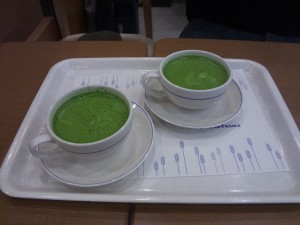 It was fun spending time with Franck! Seems he is having gooood time in Japan!!!

I have met THREE FRENCH in past month! In about 30day!

Starting with Sylvain on April 8th, Ethan on April 21st and Franck today!
Usually I get to meat people from other countries only once or twice every YEAR,
but this year and this month was really French month for me lol!!!

I am expecting more to meet soon XDDD!!!! What a year, what a month!!

If you are considering to come to Nara,
where Franck stayed this time might be a good place for you to stay at as well.

We went back to the place he stayed together after lunch.
The guest house is called guest house tamura.

You can stay at dormitory type of room at 2500yen per night.
Looked pretty reasonable with the clean and nice atmosphere.

Franck said the breakfast was nice (made with the veges that grew in the garden, sounds nice, doesn’t it?! And it was only 300yen).

About 10-15 minutes from the Kintetsu and JR Nara stations and has very good access to the sightseeing spots such as Nara park and Todaiji of Great Buddha. Think it will be a good place to stay :D!

Hi there! How are you doing? I met up with Ryu-chan from UK last Thursday :D!! I know Ryu-chan for more than an year by now I think :). Oh as I checked through my Read more…

Hello———-!   How are you doing? I went to Osaka yesterday to meet up with my friend Tony and his 2 girls!   It was SO MUCH FUN~~~! Tony married to a Japanese woman Read more…