Taking over from the previous post Sightseeing Osaka with Ari No.2

After the Umeda Sky Building we headed to the Umeda Akaso where the LovendoR live was held.

Since Ari got the tickets with No.17 & 18 for lining up to enter, Ari got the second row and I got first row!!!

I thought it was kind of odd but since I can get close to the stage, no complaint needed to make you know ;)!

A girl from Thailand named June-chan also got in the first row right next to me due to the girl’s privilege =D.

LovendoR did about 10 songs during the live I believe.

This was the first live or concert that I attended but it was quite fun and with SUPER good location =D!

I quite got to like one of the guitarists Miyazawa Marin. She speaks at a very low voice with kind of low tension and  it kind of got me XDDD.

After the live, Ariel, Robert from Germany, June-chan from Thailand, Sabrina from Austria, Nathan from Canada, Eiji from Saitama, Japan and some other people waited at the area if we get to see Reina when she and her band members come out.

The van was parked right in front of the live venue door, so we were not sure if we get to see her but we did!

The van had the curtains around to hide Reina and other girls’ from the site, but

Reina opened one of the curtains and waved to us.

It was very cute and also nice of her.

After seeing the van go off, we went to an Izakaya, a Japanese style drinking and eating place. 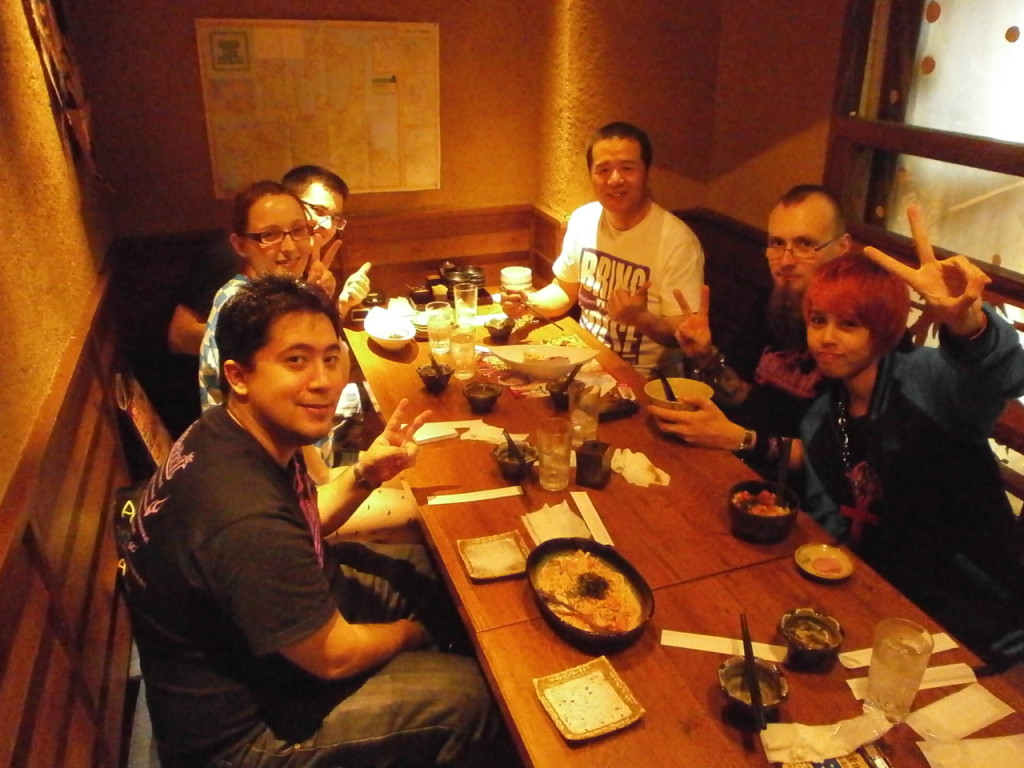 From the left, Ariel, Sabrina, Nathan, Eiji, Robert and June-chan!

Oh the Mentai Udon noodle (it is the plate in front of Ariel, the photo just recalled about it XD)
Ariel and I ordered was SO DELICIOUS!!!

I’m really glad to know you enjoyed the concert.(^O^
when I know non-fan like you starting to like Lovendor it makes me really happy!
and Reina is really a nice girl isn’t she? She always cares about her fans, you can see it already when she opened the curtain and waved to us, this is the reason why I love her so much <3
Hope you and me will go to their concert together and enjoy the concert together again someday （＾ν＾）

Hey June-chan <3
Yep, Reina is really nice ne?!
It is amazing that she has been to the business for 10 years already and she is still 23!
Seems she really enjoys what she does and I am happy with it (^-^).
I am sure she will be successful with the new band with all the fans from all over the world!
Hehe, when I go to the next concert, I really need to learn songs XD!!!!
It would be much much more fan with knowing those songs! Hehe!
xoxoxoxoxoxoxo

Hello there~! Since one of my friends Neko (of course this is not his real name though XD) asked me about “Neko cafe (cat cafe)” in Japan, thought about do a bit of research on Read more…

Ethan took me to a nice soba noodle! (Osaka)

Hi there! How are you doing? Last Saturday, I met up with Ethan from France in Osaka. He had 2 Berryz Kobo concerts that day at NHK Osaka hall. Arrived to JR Osaka station a Read more…