How are you doing today? I am doing fine!

I have asked some of my friend if there are any idea on what to write on my blog.

Got some brilliant idea from my friends.

One of the idea from corny-chan was to write something I think interesting in my daily life.

So today, I am writing funny stuffs I found at a super market I go to every once and then!!

Most part of in Japan, summer is quite hot and also humid.

So people have less appetite.

What good to eat in hot summer is curry!

A spicy food always help your appetite in hot.

And probably umedboshi too ne!! 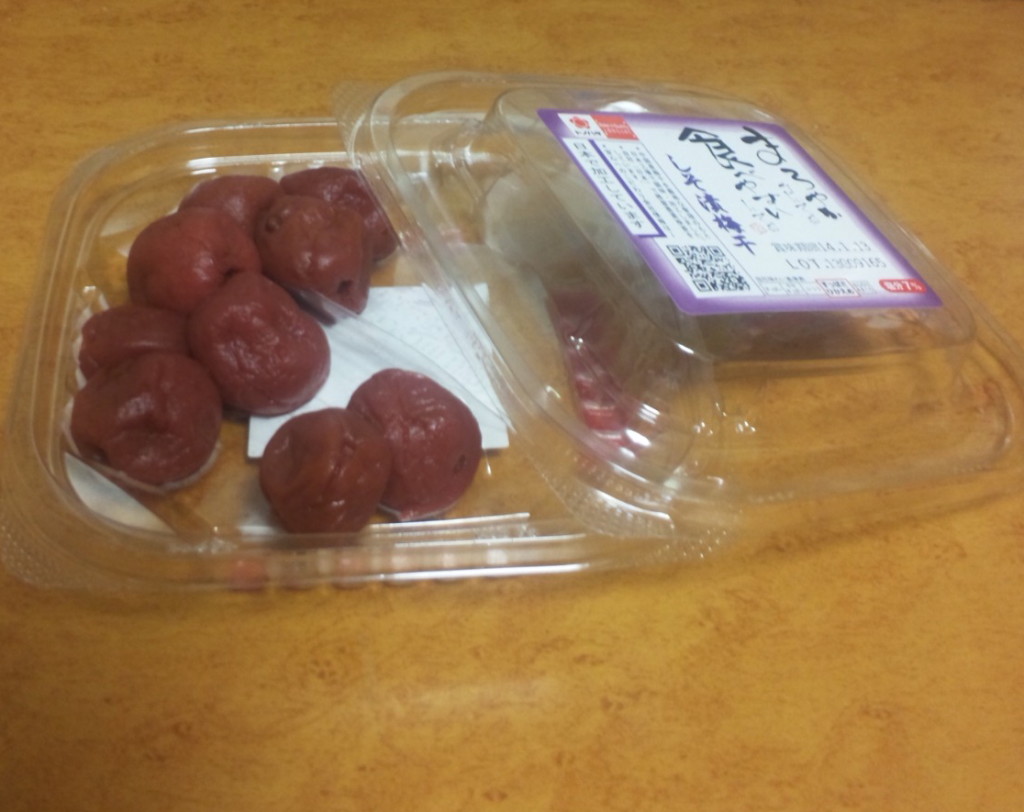 This is my private umeboshi by the way XD.

I just took out from my refrigerator to take this pic XDD!

When I was talking to one of my band guitarists 1 – 2 weeks ago.

we were talking about heat attach and dehydration.

In recent years, probably because the temperature is higher than before?

people get heat attach even they are inside the buildings.

When I was little, we did not hear about that as often as we do now.

And I myself got dehydrated last summer while I was inside my house napping.

My head and back of my neck hurt so bad, felt like puking and I believe I actually puked….

felt so strange. I googled the symptom and I noticed that I got dehydrated….

Probably because my room is on the 2nd floor of the two-storied building,

the room gets really hot during the day.

my room was on the first floor also,

so I was doing the same at my apartment here and got that for that.

It was pretty tough. I am using much more air-conditioner this year

and also some neck coolers.

Oh, let’s get back to the story, while I was talking to the band guitarist,

he also said about the heat attach he had several years ago.

In his case, he was outside working.

When he got his heat attach,

he was barely able to walk properly.

Only could walk like when you got drunk. You kind of walk shaking right and left

and unable to walk straight right?

That was what has happened to him.

people noticed what that was

and one of the old guys gave him 3 umeboshi to him.

After eating those 3 umeboshi, he got back to normal in a couple of minutes.

According to him, he was taking too much water but not salt content

to the legs and other part of his body.

While I was writing this,

I have just noticed that probably the causes of his symptom and mine were pretty different,

cus I was dehydrated but he probably wasn’t but salt content.

Anyways…. if you come to Japan in summer

and planning to walk out side for a long time or

go to concert outside or

even staying at a place with little air conditioner or something like that,

Maybe “Pocari Sweat“ would be nice.

Pocari Sweat was made in the concept of “drinkable drip injection”

You may find some more info on the wikipedia page.

Hummm getting long on heat attach and dehydration

but what I was going to write about was 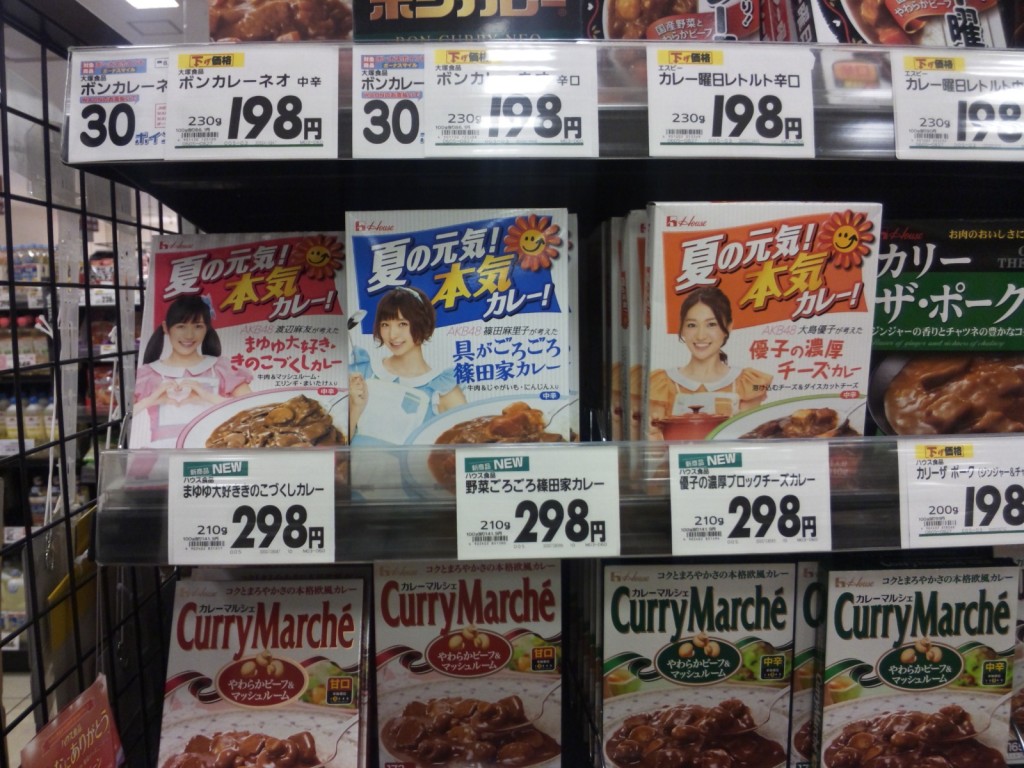 This is what I saw at a super market today.

When I went to AKB shop in Namba Osaka with Tony a bit before,

they were selling these curry, and I pointed these out to Tony and

he showed me the photo of those curries he bought at the near by supermarket.

I did recall that I have seen Shinoda Mariko curry

but did not see it the other too at the supermarket I usually go to.

I saw all 3 of them today at the other super market XDDDD.

The cheapest curry at the store was 98yen

They better be good ne???

I also found these curries XDDD! The Star Wars curries!!!! 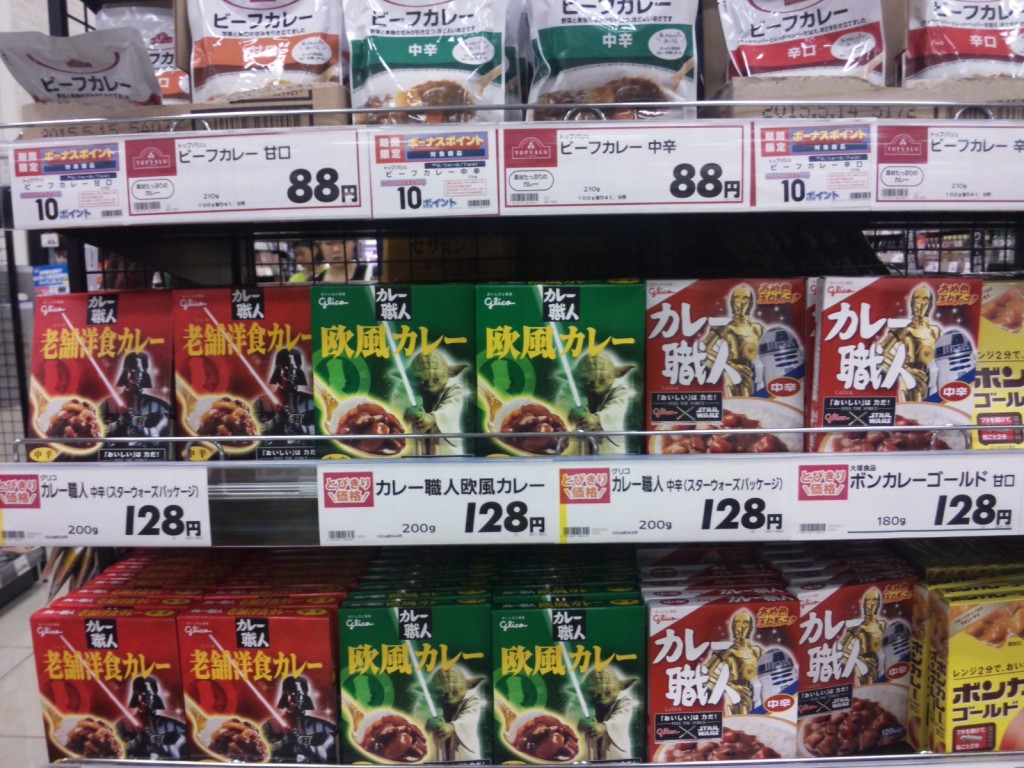 If you lost your appetite in Japanese summer, maybe curry will help ya ;)!!

P.S. I am not sure if “heat attach” is commonly used word in English,

but if you want to say it in Japanese that would be “Necchu-sho”.

And dehydration is “Dassui shojo”.

Watch out for the heat in Japanese summer ———!!!

Hey~, how are you doing?   Last Sunday, one of my band guitarists (we have 2 guitarists in the band) had a live with his other band in Osaka. So we went to Read more…

Hi there! How are you doing today?   As I wrote about the idol curries the other day, had pretty much interests in the curries and umeboshi on facebook XD. Thank you every Read more…